tramvai is a lightweight web framework for building SSR applications with a modular system and DI to quickly extend the functionality of applications. 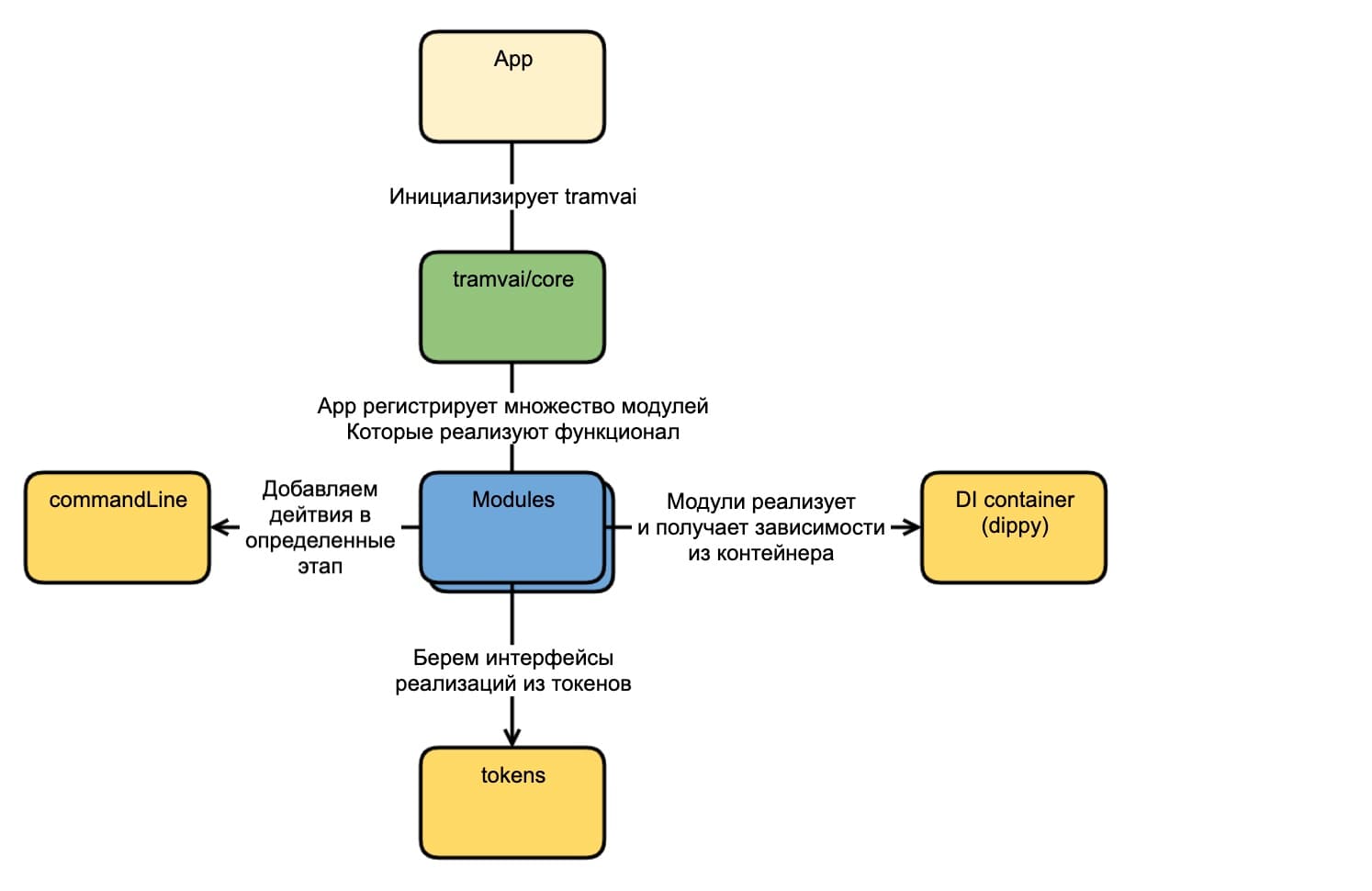 tramvai is a framework that allows you to maintain and create applications with the same architecture for many teams with the ability to share code between projects, as it tramvai is a lightweight layer that helps to interact different modules in the application

The core tramvai together with DI weighs 4 kb, everything else is implemented through third-party modules that extend the functionality of the application. This makes it possible to make applications of the minimum size, excluding unnecessary features. The architecture and modules are designed with a concept performance first for maximum parallelization, according to best practice.

tramvai it is an SSR-first framework and takes into account all the features and problems associated with the server, client and the interaction between them:

When developing tramvai we try to use open source solutions, or create basic libraries that are in no way related to tramvai and can be used in other projects and frameworks.

DI with interface taken from Nest or Angular DI​

DI is the core part of tramvai that allows you to reduce code cohesion and separation of functionality into modules. tramvai use a library @tinkoff/dippy that implements the DI container. The internal interface DI repeats the interface Nest, which allows you to conveniently describe the dependencies and implementations of classes.

A million + lines of code have already been written on tinkoff.ru and the new solution should not break the existing code, and also require applications from a difficult and long transition

Why was it developed​

Often, React applications are a constructor from different libraries that have been included in the project. This works well on a small scale, but it does not work well for large applications with 70+ developers, since in this approach it is easy to connect your own and disperse radically in the application architecture. This problem is taken over tramvai and standardized and implemented by a common application architecture that all product teams use.

There are not many open source solutions on github that implement the architecture of large applications.

One of the best simple React frameworks that takes care of server-side rendering and routing. At the same time, this is a lightweight framework that does not standardize in any way and does not solve the problems with the modularity of components. Therefore, most of the code that was written on tramvai would have to be written for next.js and try to somehow implement, since in next.js the ability to extend functionality is very limited

A similar framework that evolved and emerged at the same time with tramvai. Fusion.js does not have a full-fledged DI, a limited ability to move functionality into modules and the entire architecture is built on the basis of middlewares, and there are difficulties around the hard-coded priorities of plugins and the lack of parallelization of actions

An excellent backend framework that uses similar DI, but is not completely sharpened for SSR. And when using it, we had to have 2 architectures, one for the backend, the other written by ourselves for the client

Lightweight DI library with Angular-like interface. In the open source, there are not so many different DI options that allow you to separate class implementations, both basic general and specific for each client.

This is the most popular library for creating DI, with:

The state management library built into tramvai is almost completely similar to the Redux interface, with few nuances:

Moving to pure redux will not solve the problems, it will only add performance-related ones

Very similar to our state manager, a new library that addresses the issue of updates and performance. A good candidate to take some features from. Full transition is very expensive due to the codebase

The main basic elements of the tramvai architecture that contain the implementation of functionality. At the same time, it is assumed that such modules will not be huge and a large number of different types will appear.

tramvai is built on a DI system that stores the implementation of functionality and receiving implementations for tokens and keys. This allows you to implement communications between modules based only on interfaces, while having the ability to change implementations as needed.

Runner for a list of actions that modules can attach actions to. There are 2 types of action lists:

Within the framework of this list of actions, routes, user status, page rendering and html return to the client are received.